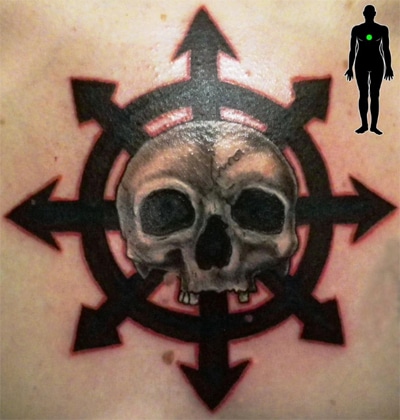 Nyúl OnTool from Green Skull Tattoo in Hungary shared with us this awesome representation of the Chaos Skull tattoo from Warhammer 40K using Hildbrandt tattoo machines.  For those of you who do not know what the heck that is, Warhammer 40,000, often abbreviated to 40K is a miniature war strategy game.  It is set in the dystopian sci fi universe created by Rick Priestley in 1987.  There has since been many video games that have been made based loosely on the theme of the science-fantasy universe.

I briefly recall playing the PC version of Warhammer back in college as I was a major Warcraft nut and thought Warhammer would be like a futuristic version of Warcraft with orcs and stuff.  As I recall, I died pretty quick and went back to Warcraft.  I’m guessin by Nyúl’s tattoo, 40K is pretty popular in Hungary?

GET COUPON
Go to Top