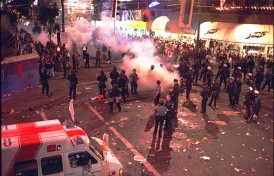 Well, its roughly 54 minutes after the game, David and Mark bbm’s me letting me know not to come into downtown Vancouver because once again, Canuck’s fans are rioting because we lost. Bad loss too, I guess the rivalry between the Vancouver Canucks and the Boston Bruins is going to be more bitter after this one. I hope David and Mark are safe out there, although I’m sure they are drunk and therefore aren’t worrying about too much. According to the news, there are more than 100,000 Canuck fans in downtown right now and a few very brave Bruins fans. God I feel sorry for those Bruins fans dumb enough to wear their jerseys amidst a full blown riot. I can just see them slowly taking off their jerseys witnessing the burning cars and masses of pissed off Canucks fans. Mark just told me rioters are setting police cars on fire and the SWAT team is on the scene. I like watching hockey too, but I have no idea how or why it seems only Vancouver riots like this when we lose big.