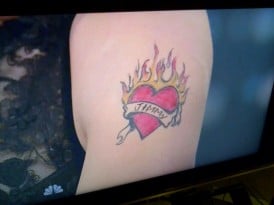 So I was watching Jimmy O’fallon last night and Uma Thurman went on the show with a bandage. If a tattoo artist bandaged up a tattoo like the way it looked, I would say he wasn’t a very good one. Anyway, turns out Uma Thurman claimed that she got smashed the night before and that she was so excited to be on the show she ended up tattooing the name “Jimmy” on her arm. She took off her bandage and there was a large red classic tattoo heart with Jimmy O’Fallon’s name on it with big red flames. I must admit it was drawn pretty well, but I could tell it was a fake tattoo from a mile away. Got to hand it to her, she is a pretty good sport when it comes to jokes and that one gave me a chuckle.
To be honest I wondered if it was planned, I mean this is show business and in show business just about everything is. Even Miami Ink and LA Ink. I refuse to believe even half the drama on that show wasn’t scripted by a board of executives before it was aired. I bet most of the cast was trained for acting lessons before they were even considered putting them on camera. All in all, decent entertainment but little substance, much like the usual tv series nowadays. All these reality tv shows are getting on my nerves, not because its about reality, its because it isn’t and its blatantly tricking people to believe in a different reality.