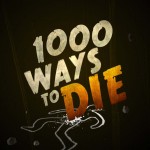 So my good friend from out of town got drunk one night and called me up for some spontaneous tattooing work.  He loves the show 1000 ways to die and wanted to put the shows logo on his left breast.  I say breast because, well, he’s a fat porky dude.  So I started tattooing the outline on him, halfway through he chickens out and tells me to stop, he was going to go home to think about it. He hasn’t called me since and he already left town with his 1000 Ways…  outline on him.  I guess it wasn’t that big so if he needed to cover it up, it should be no problem.

I for one don’t understand the allure of the show.  I found the show interesting the first couple of episodes.  After the 4th or 5th one I started thinking most of the stuff on there is make believe.  In the beginning of the show, they always say the identities of the people that died have been changed out of respect for the deceased but seriously, if the producers of that show had any respect, they wouldn’t make every victim to look like such a douche bag.  Has anyone ever noticed that every victim is described as some kind of wacko asshole that totally deserved their fate?  Come on, how believable is that?  It seems to me its just the writers that are trying to get everyone to hate the victim thus making it good TV.  I call bullshit personally and I don’t get entertained much by fake reality TV anymore, so played out nowadays.  The only saving grace of that show is the hot chicks they got from time to time, I can dig that!