Tattoo Infections in the USA by Contaminated Tattoo Ink

Tattoo Infections in the USA by Contaminated Tattoo Ink 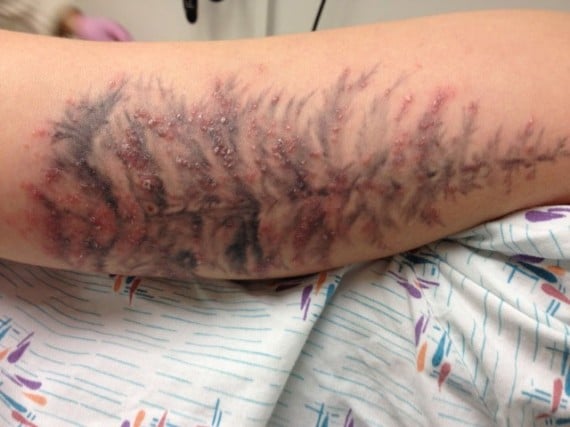 Here is an article about reports of tattoo infections in the USA via contaminated tattoo ink. I decided to share this article because this one hits too close to home. Some of us may have heard our fair share of horror stories regarding China made tattoo ink, but this story, surprisingly, has nothing to do with China manufacturers. The inks discussed in the article refers to ones produced by an Arizona based manufacturer. I know none of the brands we carry are manufactured in Arizona which made me breathe a sigh of relief.

The article states that the CDC, Center for Disease Control has identified 22 skin and soft skin tissue infections last fall in four States, these states are New York, Iowa, Colorado and Washington.  Products from four tattoo supply companies were implicated in the probe, the CDC did not, however, release the names of the companies.  It has been found that the inks were contaminated during the production process before distribution.  After some digging on the net, I’ve found the alleged name of the brand used that was contaminated is “Catfish Carl’s Realistic Washes” from NeedlesandSins.com.  According to their post,  14 of the confirmed NTM infections, specifically Mycobacterium chelonae, came from Upstate Tattoo Company in Rochester, NY. YNN.com reports that one of the tattoo artists purchased ink at a tattoo convention in Arizona and used it on clients and the co-owner of the shop. A second supply was ordered thereafter and that batch contained the bacteria.  Upstate Tattoo Company has since received a clean bill of health as it was found that the tattoo ink was contaminated during the production process.

The bacteria that got into the containers due to the manufacturer using distilled or reverse-osmosis water which is not necessarily sterile.  In the cases from New York which involved the Arizona based manufacturer that made “Catfish Carl’s Realistic Washes”, the contaminated water was used to dilute black ink into various shades of gray.  Some of the symptoms of infection caused by contaminated ink include rashes and abnormalities at the site.