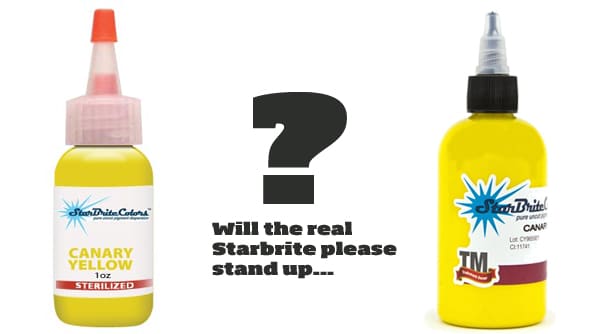 Starbrite Colors has been a well known brand in the tattoo industry since the early 1990’s. Few people however know of the brands interesting company history and its subsequent company split up that occurred in the mid 90’s.
Starbrite Colors tattoo ink was created by Michael Nicholson (tattoo artist also known as Papillon), Carol Landry and Tommy Ringwalt Sr. in the early 1990’s. The colors were well received by the tattoo industry due to their proprietary formula that created amazing colors that heal brilliant and true to their original shade. In the mid 90’s, differences between the 3 owners prompted Tommy Ringwalt Sr. to strike out on his own to found Tommy’s Supplies. Michael Nicholson and Carol Landry continued production and distribution of Starbrite through the original company Papillon Tattoo Supplies. CORRECTION: Tommy Ringwalt Sr. was never an owner of Papillon Tattoo Supply and he had no part in the creation of Starbrite.

Both Tommy’s Supplies and Papillon Tattoo Supplies retained the rights to the Starbrite brand name. In the years that followed, Tommy’s and Papillon would introduce minor differences to their labels, bottle caps, brand logo and even the way they wrote Starbrite: Papillon wrote it as “Starbrite” and Tommy wrote it as “StarBrite” with the capital B. Needless to say, this was all very confusing to the consumer and we at Hildbrandt Tattoo have dealt with our fair share of customer calls asking why their ink labels look different from ones bought from another supplier. CORRECTION: Tommy Ringwalt Sr. registered the Starbrite trademark under Tommy’s Supplies while he was working for Papillon Tattoo Supply and there appear to be some discrepancies as to whether or not Tommy Ringwalk Sr. had the right to register the Starbrite trademark under his company name when the ink was made by Papillon Tattoo Supply and he was under their employment.

Michael Nicholson passed on in 1998 and Carol Landry continued on to lead Papillon. Much of the original staff that has produced and sold Starbrite for decades is still working there. In 2001, Tommy Ringwalt Sr. partnered back up with Carol Landry at Papillon again in an attempt to work things out. However, this reconciliation only lasted 3 years and in 2004, the partnership was ended. Carol Landry continued on with Papillon and Tommy continued on with Tommy’s Supplies. During this time, Tommy Ringwalt Jr. son of Ringwalt Sr. assumed control of Tommy’s Supplies. Each respective owner has since developed some new colors and labeling systems that further differentiate from each other’s products.

Today, Starbrite is one of the most well-recognized brands of tattoo ink in the industry. It has had a long history of creating beautiful tattoos with a high degree of safety. It is also one of the most widely copied brands in China, which also compounds the problem of the tattoo ink being made by 2 companies that use different labels and bottles with the same formula. However, other than the annoying task of having to explain to people why labels may look different depending on which supplier you buy it from, we absolutely love distributing the brand!